Principia’s SupplyBuilder® Residential Siding data product provides a channel view of supply through coverage of manufacturer share at a regional level and quantifies product flow through each distribution channel. 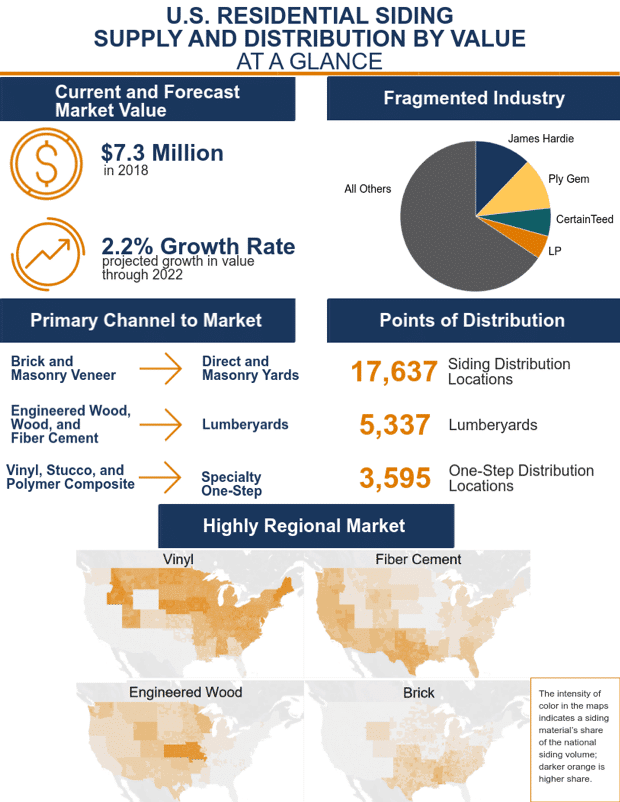 For more information about Principia’s SupplyBuilder® for residential siding, contact us today. 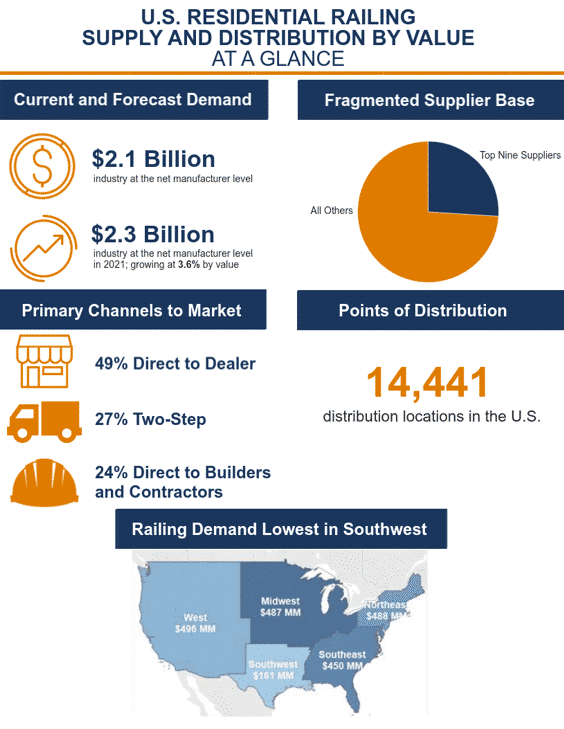 Principia’s SupplyBuilder® Residential Doors provides a channel view of supply through coverage of manufacturer share at a regional level and quantifies product flow through each distribution channel. 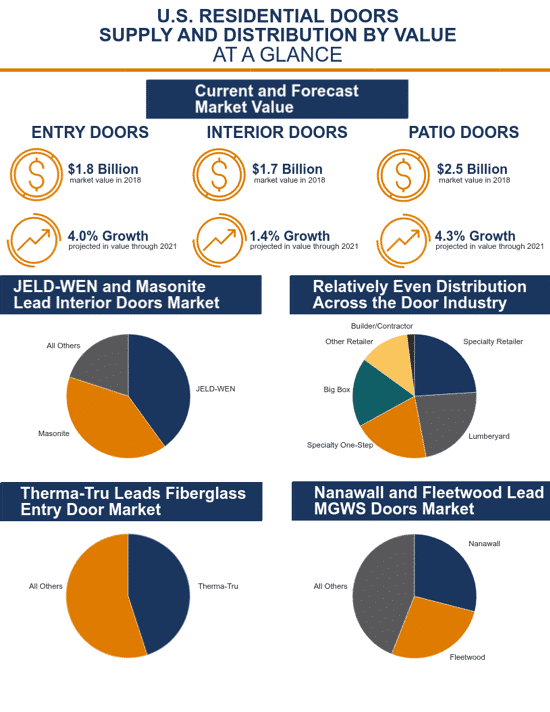 For more information about Principia’s SupplyBuilder® for residential doors, contact us today.

Here is a snapshot of 2018’s building materials demand and supply. Information included in the graphic below is pulled directly from Principia’s DemandBuilder®, SupplyBuilder®, and GrowthBuilder®.

Far too often we see companies not recognize the power of integrating external and internal data. Powerful insights can be developed by combining market and supply data with your own sales figures – or in combination with sales from your distribution partners – to drive revenue growth.

Recently Principia partnered with a building products manufacturer who wanted to focus its two-step distribution partners in underserved markets. The company had its own view on what it believed market demand to be and one distributor had another. An integrated view of the entire market including demand and supply was needed to make the case with its distribution partner on where the best opportunities existed for sales growth.

Utilizing Principia’s customized data products platform, the manufacturer was able to map current demand for its products within uniquely distributor-defined sales territories. Data visualizations provided demand in units, market value and number of projects, in the distributor’s sales footprint. Dealer coverage was overlaid on top of demand for selected distribution centers, with specific dealers and current suppliers carried also referenced by name. The integrated data highlighted where the current level of sales focus didn’t match up with demand. Sales personnel for both the manufacturer and its distributor were redeployed to aim these resources at specific demand pockets within each territory.

The Power of Integrating Market Demand and Supply Data

The result was nearly $10 million of new sales in the first year of using Principia BuilderSeries® data. The company continues to use this supply-demand data to drive engagement with its distributors and their dealer customers in current and other targeted territories.

To further examine the ranking results click on the 3 figures, move the rank filter and hover over a specific location.

Figure 1 in the interactive visualization above shows county level rankings of lumberyard location count. The top ranked counties in terms of lumberyard locations tend to be clustered along the North Atlantic coast and Great Lakes where new construction and lumber demand was most heavily concentrated throughout the second half of the 20th century. Overall, 33 of the 100 counties most densely populated with lumberyards are in the Northeast census region and 22 are in the Midwest.

By contrast, as shown in Figure 2, counties ranking highest in 2015 lumberyard revenues tend to be further south and west, particularly in Florida, Texas and Southern California. This is driven by the trend from the 1990s to the present of increased migration to the sunbelt states. For lumberyard revenues, 35 of the top 100 counties ranked by channel revenue are in the South Atlantic division, 16 are in the West South Central division and 14 are in the Pacific division.

Florida and Texas Ripe for Expansion

The implications of this disconnect are shown in Figure 3 which calibrates each county’s lumberyard revenue per location by county. The figure shows that county rankings follow and magnify the general pattern of the revenue rankings. The states of Florida and Texas look particularly strong with 5 of the top 10 counties in Florida and 3 of the top 10 counties in Texas. This analysis suggests Florida and Texas along with the South Atlantic, West South Central, and Pacific divisions more generally, provide a more relatively hospitable competitive environment for existing lumberyards and those looking to expand into these markets. With fewer dealer outlets serving a given level of demand, channel participants should be able to enjoy opportunities to scale revenue and a higher degree of pricing power. These forces should allow them to achieve greater margins and encourage other companies to enter these regions seeking to capture their fair share of market growth.

The rankings presented above were calculated using Principia’s DemandBuilder® and SupplyBuilder® databases. Learn more about the BuilderSeries® services Here.

Number of Lumberyards and Average Home Age by State, 2014

From pre-World War II through the 1960s the majority of home building took place in the Eastern United States population centers.  Consequently, the average age of homes are the highest in the Northeast and Midwest and are usually greater than 50 years old. Lumberyards, not surprisingly, were built in close proximity  to keep pace with homebuilding resulting in the highest count of lumberyard locations in the East. As indicated in the figure above by the size of the circles the larger the circle the higher number of lumberyards.

Looking forward, projections for major centers for home building are located in the South, Southwest and West.  Subsequently these regions have fewer lumberyard locations per capita.  Opportunities exist for lumberyards in homebuilding growth centers to capture growth from new construction in the Sunbelt regions. However lumberyard operations would be wise to also prepare for the next downturn in the cycle by also serving remodeling. For lumberyards in older housing regions, there will be an increased need to focus more on remodeling to support growth.

In all regions, the use of showrooms to attract homeowners for upscale projects is key to driving both growth and margins.  Careful examination of the supplier and product portfolio most often points out the best product lines, suppliers and customer segments to make money.  In addition, evaluation also presents opportunity to identify areas where margin sieves exist to be re-evaluated and repositioned.

Principia recently published Lumber and Building Materials Distribution 2015, its third comprehensive analysis of the $147 billion industry. Through examination of revenue by region and number of dealer outlets, regional differences in the average revenue per outlet were identified.   Channel revenue is split between two major dealer categories, lumberyards and specialty 1-steppers. The national average revenue per location is $6.8 million which is the outcome of dividing $69 billion by the approximately 10,000 locations in these categories.

The historical development of the lumber and building materials distribution industry shows that branch locations were typically built in the major population centers in the post war era and there was a preponderance of locations in the Midwest and Northeast.  However, as the housing expansion took place in the 1970s to the South and West, the industry did not keep pace in terms of shifting the distribution base. In fact, during the housing downturn, much of the industry focused on closing underperforming locations without consideration of how to position when the recovery took hold.

Best Opportunities for LBM Dealers are in West and South

As shown in the figure the highest average revenue per location is in the West and Southwest.  Virtually everyone’s forecast projects the West and Southwest to continue to be the growth engine for new housing starts.  A key takeaway for LBM dealers looking to expand regionally should be to carefully examine their strategy and consider not only what is easiest to accomplish but which opportunities represent the greatest potential for revenue and margin growth.

From market insights to business strategies, we are ready to discuss your needs.